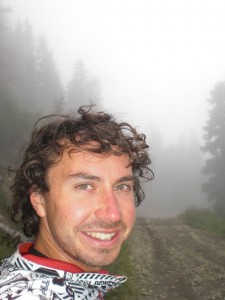 Today’s post comes from a new mate of mine named Jase Rodley. He’s a good old Australian boy who’s currently hanging out in my home country of Canada, ripping things up in the mountain bike heavens of Whistler, BC. I really dig this guy and look forward to getting to know him better. Jase rides bikes because it makes him happy….how can you not like this guy?

As a kid growing up, I never thought I had a particularly special childhood. I was just another average kid living an average life, part of which included riding bikes.

Looking back on it though, my passion for all things bikes began at a very early age. My parents can’t tell me exactly what age I started riding, but they both assume it was just after I turned three. I was allowed to ride up and down our driveway – anywhere further and Mum or Dad had to come with. A year or so later I was allowed to ride up and down the street, so long as my older sister was on her bike too (we lived on a very quiet cul-de-sac, or no through road).

Already at such a young age and without me knowing, riding bikes was my life. By age six I’d built my first jump, received a full face helmet from Santa Claus, jumped three neighbourhood kids, and broken my elbow as a result of riding my bike.

Fast forward twenty years, and not all that much has changed. I’ve now built my own pump track and helped to build a lot of trails, received a full face helmet, loads of parts and plenty of deals from the companies that either sponsor me or just do what they can to help me out, and over the last year I’ve managed to separate my shoulder, break a rib, and wake up to the paramedics flashing torches in my eyes only to realise the next day that I’d had a concussion.

The fundamental difference between now and when I was a kid however, is that my life is now in my control. I know that sounds very obvious but I think it’s an important point. Two years ago I was working a full time office job in Australia, commuting to work on my bike (23km one way!), riding in the evenings and getting out for some cross country mountain biking once or twice on the weekend. It sounds like a lot of time on the bike, but time riding had to fit around my work. If I had to work on the weekend, it was my cycling, and in effect my happiness that suffered as a result.

Thanks to a very supportive wife, we made the move to a town called Whistler in British Columbia, Canada. They’re not kidding when they say that Whistler is the “Mountain Biking Mecca of the World”. I have been lucky enough to work here for the Whistler Bike Park as a Mountain Bike Instructor, getting me out on the bike daily. Although the money isn’t the sort that you see working in IT, I’m getting paid to ride my bike, teach people how to ride bikes, and talk about my passion! To make my situation even more envious, my wife has taken a real interest in the sport since moving to Canada, and I get the opportunity to fly through the air next to my wife on our bikes at least three or four days of the week if not more. 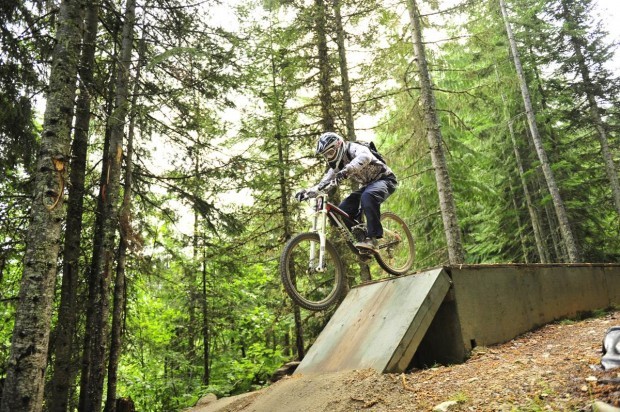 Jase from ridemorebikes.com in the Whistler MTB Park

The journey doesn’t finish here though, it’s only just began. My life so far has shown us that if we choose to live to ride, we can. Life doesn’t have to just be about the 9 to 5, it can be about whatever you want. The problem is, in order for your life to be about that “something different, you may need to give up something else – in our case the big one was income! I can see our lifestyle being more than heavily involved with bikes in the future. I’ve never been much into competition, although I have ridden in my share of cross country races back in Australia. I do plan on racing some downhill this year to see if I can get into it though. My wife and I both plan on spending two or three months in Europe sometime in the future with some touring bikes, a tent and the bare minimum, and I can see myself running a bike related business in the future as well.

To me, riding bikes isn’t just about staying fit or challenging myself, it’s about the freedom. The freedom of enabling me to go and do the things that I do, whether it be riding my bike to the lake to relax, or clearing an intensely technical trail full of rocks and tree roots. It’s entirely my choice, and it’s yours too!

It’s a positive future for me. Bicycle sales are going up all over the world, presumably as a result of fuel prices going up as well. Whether those bicycles are mountain bikes, road bikes, fixies, cyclocross bikes, comfort bikes, cargo bikes, tandems, fat bikes, recumbents or any other weird and wonderful flavour of bike, I’m happy. Whether they are replacing the family car with a cargo bike, or buying a road bike to get some extra exercise, it’s all good.

Live to ride and ride to live!

For more about Jase, take a look at his blog.